World-wide trafficing in slave prostitutes, child sex workers, and forced laborers is a large and ever increasing problem. This country puts sanctions on other countries that allow the operation of these things.

Well, at least we used to. Read the following from SFGate and see the favoritism shown to some by the Emperor Chimp.

President Bush decided Wednesday to waive any financial sanctions on Saudi Arabia, Washington's closest Arab ally in the war on terrorism, for failing to do enough to stop the modern-day slave trade in prostitutes, child sex workers and forced laborers.

In June, the State Department listed 14 countries as failing to adequately address trafficking problems, subjecting them all to possible sanctions if they did not crack down.

Of those 14, Bush concluded that Bolivia, Jamaica, Qatar, Sudan, Togo and the United Arab Emirates had made enough improvements to avoid any cut in U.S. aid or, in the case of countries that get no American financial assistance, the barring of their officials from cultural and educational events, said Darla Jordan, a State Department spokeswoman.

Cambodia and Venezuela were not considered to have made similar adequate improvements. But Bush cleared them nonetheless to receive limited assistance, for such things as combatting trafficking. In the case of Venezuela — which has had a tense relationship with the United States under the leadership of President Hugo Chavez, one of Latin America's most outspoken critics of U.S. foreign policy — Bush also allowed funding for strengthening the political party system and supporting electoral observation.

In addition to Saudi Arabia, Ecuador and Kuwait — another U.S. ally in the Middle East — were given a complete pass on any sanctions, Jordan said. Despite periodic differences, oil-rich Saudi Arabia and the United States have a tight alliance built on economic and military cooperation.

That left Myanmar, Cuba and North Korea as the only nations in the list of 14 barred completely from receiving certain kinds of foreign aid. The act does not include cutting off trade assistance or humanitarian aid, Jordan said.

The White House statement offered no explanation of why countries were regarded differently. Jordan also could not provide one.

As many as 800,000 people are bought and sold across national borders annually or lured to other countries with false promises of work or other benefits, according to the State Department. Most are women and children.

This doesn't say much for the chimp and his "christianity".

There are about 90 different ways to churn this one up.

Let's start with George Bush's Speech about the sex traffickers at the U.N.

Add the no bid contracts in Iraq

Granny,
What a two-faced asshole the chimp was with that speech. I guess he must figure that he can decide when a country is wrong in this area.
Just like his policy on nuclear...or as the idiot would say nuculer...weapons. Conntries he likes, Israel, Pakistan, India, can have them. Countries he doesn't like, North Korea, Iran, can't.

Thanks for the link. Very interesting. Have to do some research there. 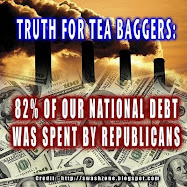